Back in 2014, when John Banville, under his Benjamin Black mask, added a “new” chapter to the life and times of Raymond Chandler’s iconic hero, Philip Marlowe, I took the opportunity to compile a summary of the many non-Chandler books that featured either Marlowe or the author himself. The result appeared in the Los Angeles Review of Books. https://lareviewofbooks.org/article/big-sleep-raymond-chandler/

I was entertained by Banville/Black’s THE BLACK-EYED BLONDE, a sort of sequel to arguably Chandler’s finest novel, THE LONG GOODBYE. It was clearly an attempt to capture the style, mood and atmospheric locales of what had gone before, a very efficient pastiche. 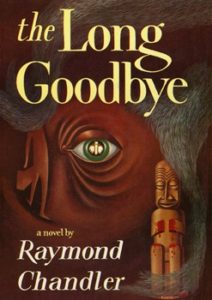 I fully believe Banville’s on record motives for writing the book. As he told Lewis Lapham, he wanted to see if he could match the old master’s work and he thought it “might encourage readers to go back to the originals.” I’m just as sure that’s why Robert B. Parker agreed to try his hand at it (completing Chandler’s THE POODLE SPRINGS STORY, as well as concocting the disappointing PERCHANCE TO DREAM), along with twenty-three crime writers, myself included, whose stories appeared in the anthology celebrating the author’s centennial, RAYMOND CHANDLER’S PHILIP MARLOWE. 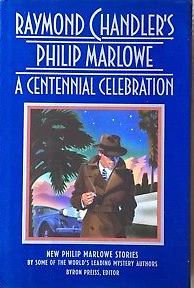 Having myself sipped of the gimlet, I think I understand the reasons for many of the previous Chandler-Marlowe pastiches, as well as the parodies (S.J. Perelman’s “Farewell My Lovely Appetizer” and Martin Rowson’s graphic novel THE WASTE LAND in which Marlowe is in fast literary company, including T.S. Elliot, both well-worth a search). But I haven’t a clue as to what was in Lawrence Osborne’s mind when he signed on for the latest Marlowe opus, ONLY TO SLEEP. 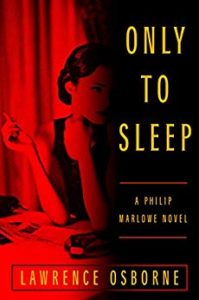 Set in 1988, the novel is beautifully written, with several descriptions of Baja California and Mexico in general that are hauntingly poetic. The area is familiar to the peripatetic British-born Osborne, who spent several years there as a journalist. There are many, some may think too many, musings on old age. His Marlowe is seventy-two, but behaves as if he were a decade older, as, doddering, he tries to close the book on his last case.

It’s an insurance swindle. Old man Marlowe, who I should note is younger than I, is hired by two smarmy insurance execs, bespoke-suited, in Baja yet, who want him to travel to an off-the-grid coastal flyspeck to investigate the drowning death of one of their American policy holders, Donald Zinn. They’re hoping the detective can detect something that’ll save their company from turning over $2-million to Zinn’s widow.

As expected, Dolores Zinn is a sultry stunner. And it takes Marlowe only slightly less time for him to fall under her sway than to deduce that her loutish husband is very much alive. And here, with the novel barely dented, and Marlowe attending a soiree with the Zinns, I realized I was frowning at the book. What was going on? Who were these expats who’d sashayed in from a Graham Greene entertainment? And who was the old guy people were calling Marlowe, propping himself up with a cane that housed a steel blade, his detailed history of which only Stephen Hunter’s Bob Lee Swagger would appreciate.

Could Marlowe possibly be this over-the-hill retiree, squandering his golden years hanging out with other codgers, playing cards and packing away suckling pig, or weekending at a bar, shooting down the mezcal? It’s a bit of a stretch for him to have once been the near-spartan, solo chess player who, regardless of his increasing complaints about Los Angeles, continued to live and work there for most of his life.

In Marlowe’s frequent senior moments, wouldn’t he recall events or people from his past? Maybe good girl Anne Riordan or that little vixen Orfamay Quest? And would he use the ersatz 40’s slang Osborn puts in his mouth? Did anyone in this country back then, Chandler in particular, refer to ladies of the night as “Able Grables” as Marlowe does several times? Would the Marlowe Chandler envisioned have even been aware of Lisa Birnbach (co-author of the 1980 bestseller THE OFFICIAL PREPPY HANDBOOK), much less consider her a key observer of US life in the early 80s?

More important, would even a semi-senile Marlowe take a bribe to walk away from an investigation, especially one involving murder? 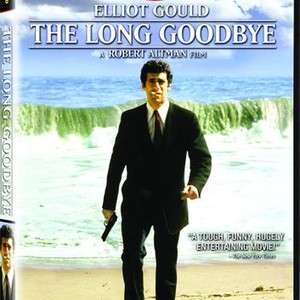 Bottom line: just as the The Long Goodbye movie is less an adaptation of Chandler’s novel than it is a Robert Altman film, ONLY TO SLEEP is very much a Lawrence Osborn novel and probably a good one. Labeling it “a Philip Marlowe novel” is, at best, an exaggeration.