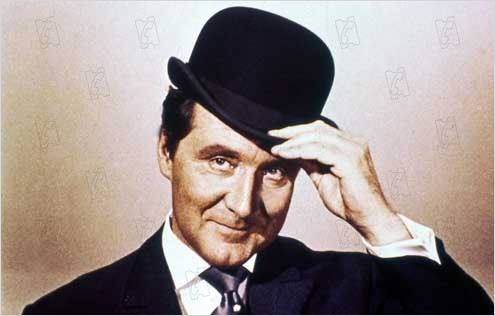 So another hero bites the dust.

Even though he was ninety-three, Patrick Macnee’s death notice today was a painful surprise. Not only was he responsible for hours and hours of the kind of smart TV that had a powerful influence on my, well, apres-formative years, but I was lucky enough to meet him a few times in the past few decades when we were both flogging books.

Memories play tricks and mine can be a virtual prankster, but I think the first time we met was a day in September of 1989. We were early for an authors’ luncheon at the Balboa Bay Club in Newport, I, with my second novel, LAUGHING DOG, Patrick with, I believe, his BLIND IN ONE EAR. The dining room was filled, mainly with ladies from the OC, lured by the announced appearances of Patrick and Steve Allen, who was promoting one of his mystery titles.

I was about to enter when I was aware of someone, Patrick, standing just to my left. He was studying the crowd, and the empty dais. As soon as I introduced myself, he suggested we adjourn to the lounge where, for the next fifteen or twenty minutes I tried desperately not to appear to be the simpering fanboy I was, sharing a table with an idol who was, if anything, more charming and witty than the character he’d played.

Eventually, a  hostess for the event sought us out and wondered if we’d care to “come and meet the members.”

“Not yet,” the hostess replied.

“Ah, well, give us a few moments here to finish up,” Patrick said. “Dick and I will be in shortly.”

Watching her return to the dining area, he said to me, “I think we’ll just wait for Mr. Allen to arrive. At these affairs, It’s better if one isn’t the first into the room.”

This morning’s obit in the LA Times mentions that Patrick “fell in love with acting” while he was at Summer Fields prep school. One of his classmates, with whom he acted in student productions, was Christopher Lee.  Much later, the duo would appear as Sherlock (Lee) and the good doctor (Patrick) in two television films, “Incident at Victoria Falls” and “Sherlock Holmes and the Leading Lady.”

Lee passed away earlier this month, so, once again and, alas, for the last time, Patrick will not be the first into the room.