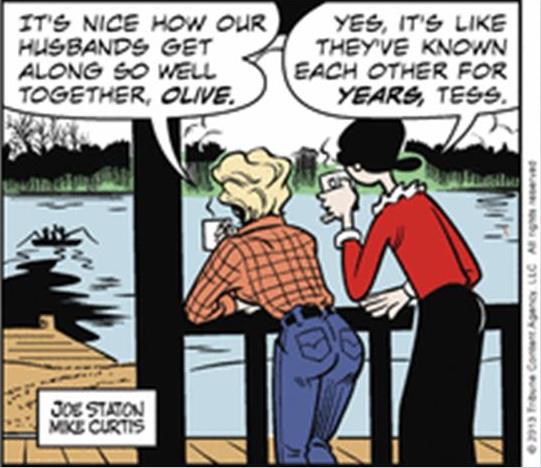 Tess and Olive watching their husbands, Dick Tracy and Popeye, fishing on a lake

Steve Canyon has been grounded. Little Orphan Annie quit the biz after a Broadway run. Brenda Starr retired. Captain Easy, Smilin’ Jack and Terry Lee have settled in at the old soldiers’ home. Alley Oop evolved.  Tarzan left the jungle and moved to Tarzana.  Flash Gordon found a home on Mongo.  Kerry Drake and Rip Kirby have turned in their gumshoes. God only knows what happened to Steve Roper and Mike Nomad.

But Dick Tracy is still on the job.

Decades after the passing of his creator, Chester Gould, in 1985, several creative folks, primarily Max Allan Collins and artist Dick Locher, have kept the world’s greatest detective armed and dangerous  Since 2011, the team of artist Joe Staton and Mike Curtis have turned the strip into something quite unexpected — a beautifully drawn, smartly propelled entertainment that successfully maintains, perhaps even burnishes, the elements that have made the comic so iconic, while playfully treating it to a fresh layer of 21st century humor  and (gulp) sophistication.

Not only have Staton and Curtis re-introduced a vast assortment of characters from even the early days of the strip, allowing them to have become as bad as they want to be, or as good (The Mole is now a sort of hero to the children of his neighborhood), they’ve concocted a Gould-worthy lineup of new villains. My favorite is Melies who has a round pale gray head that resembles French film pioneer Georges Melies’ famous moon (minus the spaceship stuck in the moon’s eye socket). 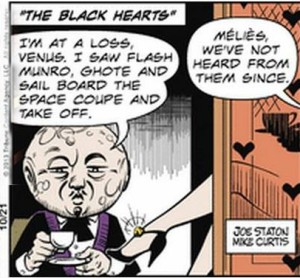 The new team has also opened up a section of the panel frame to allow characters to wander in from other classic strips. There was a particularly wistful appearance by Walt Wallet from Gasoline Alley. By anybody’s count, Walt would be well over 100 by now, and, as Staton and Curtis would have it, he looks it, bent and with a hair loss that resembles molting rather than male pattern baldness,  Currently, as the  11/1/2013 panel section above indicates, Dick and Popeye are on a fishing vacation with their wives. (Incidentally, at Popeye’s suggestion, they’re baiting their hooks with spinach.)

But if you think the strip is all grins and goofs, be aware that Tracy is fighting two ruthless gangs, each hellbent on taking over the Second City, As indicated above, Melies’ crew is called The Black Hearts.  Many of Tracy’s old nemeses populate the opposition.

The current strips are available from GoComics.com, if not from your daily newspaper. And you can get a dirt-cheap strong sampling of the new Tracy in the Kindle book, Calling Dick Tracy! 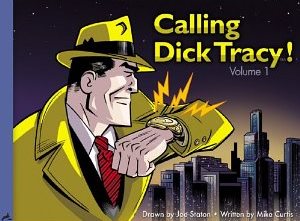